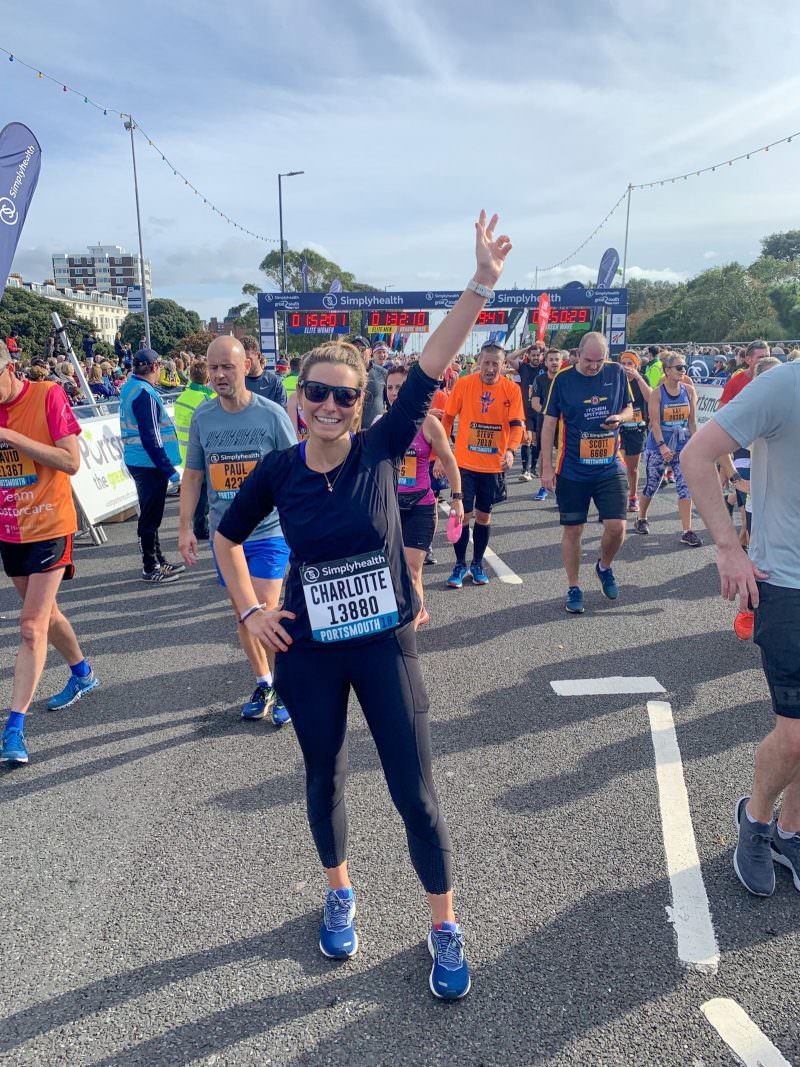 This was my second year running the Great South Run and the weather did not disappoint either year; it isn’t always sunny at the seaside but it seems that something’s shining down on Portsmouth during the GSR!

I didn’t leave enough time to get to the race this morning, meaning I had a bit of a last minute panic trying to find parking and ended up parking in a rather questionable spot. I hot-footed it to the start line, had to use the elite portaloo (after making sure they’d all used it) and had just enough time to watch the elite men start their race.

The plan for this race was to just run slow and steady, between 9.05-10min miles, my current easy pace.

Except for that’s not really what happened…starting at the front of the wave (I had to duck in because I was so late to the start!) meant that everyone else around me was going off like a rocket, and although I kept to the side and out of the way, I still clocked 8.30 min miles for the first 3.

I made a conscious effort to hold back and reduce my pave to within range from then onwards, including having a walking break during the water station at mile 4. 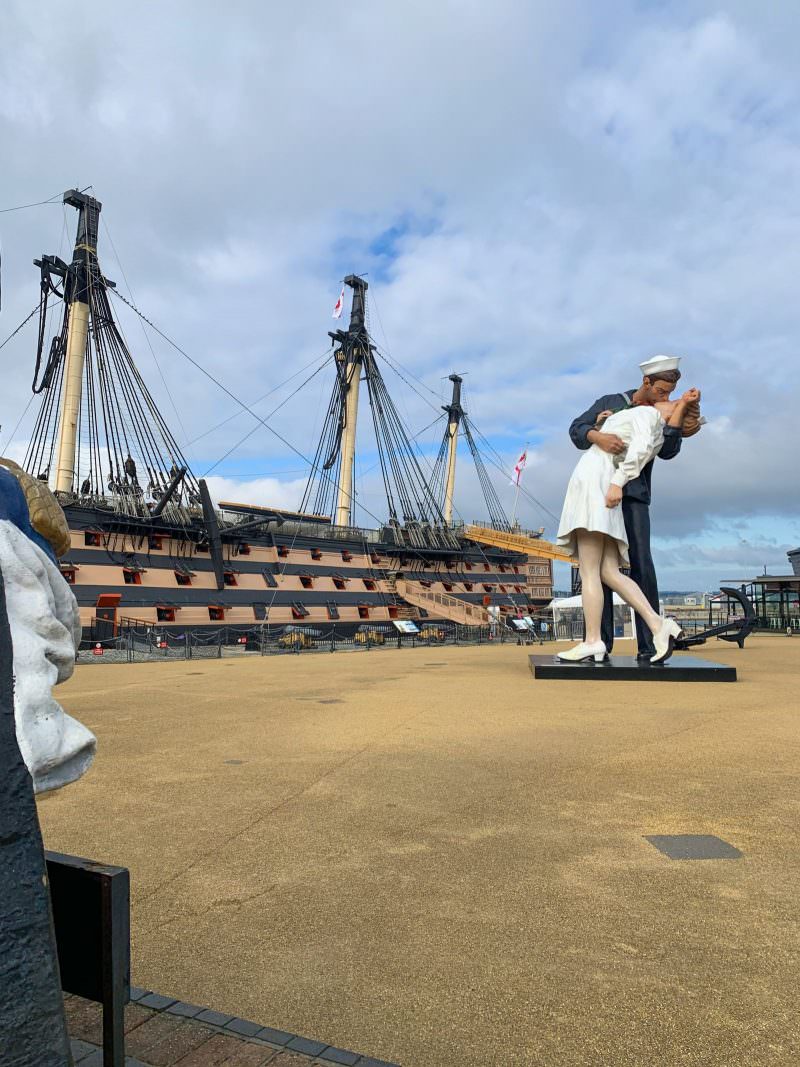 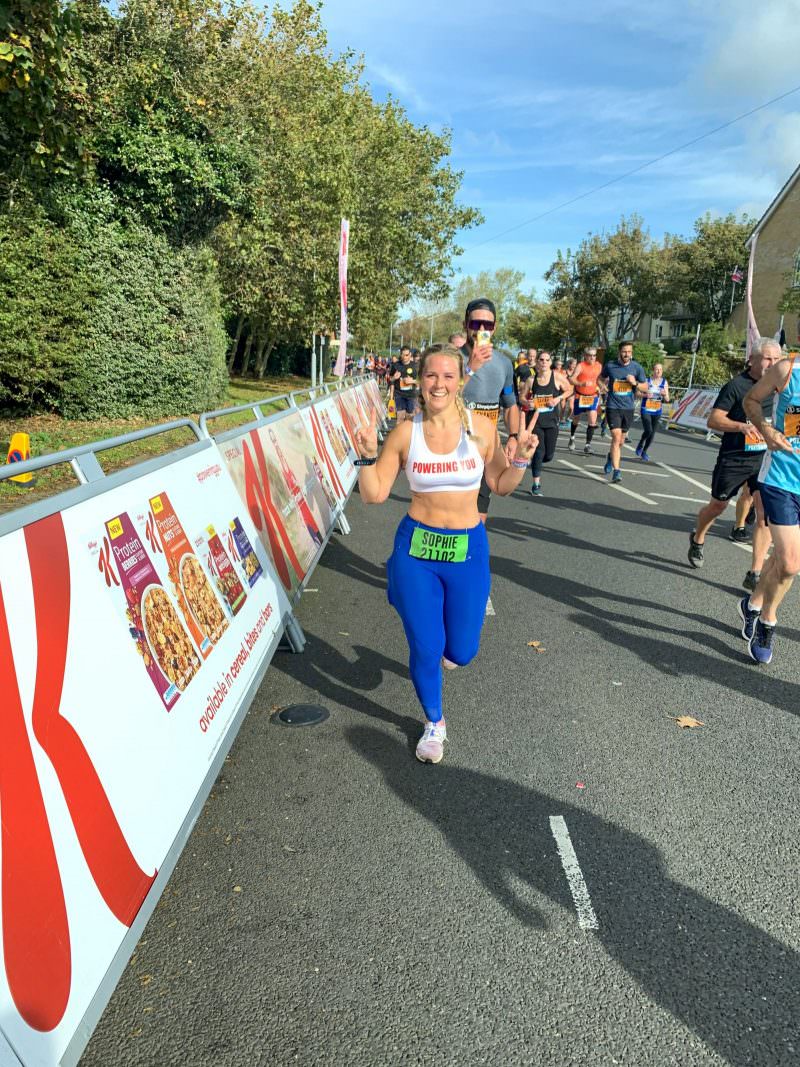 Just after mile 5, I bumped into my friend Sophie and her running buddy, Charlie.

They were running a similar pace to the one I knew I should be running. So I asked if I could stick with them until the end. Soph told me she was really hungry. So we started the hunt for kids giving out Jelly Babies and looked forward to the aid station at mile 7. The race is sponsored by Cliff. And I personally don’t love their gels but I do regularly use their Shot Bloks. I wanted to grab multiple packs (they can get quite expensive when you’re marathon training!) but obviously just took the one strawberry pack.

They definitely gave a boost of energy. It’s quite difficult to fuel properly when races start so late (I crossed the start line at 10.35am). And there are waves going from 10.35 to 11.15ish, based on predicted time. There are also pacers groups. (Although I actually can’t find info on which times they pace.)

The course is flat, well supported and really pretty along the waterfront and around the lake – although a lot of it goes through residential roads.

There were only two water stations which I think is a little on a minimal side. And they were in bottles with screw caps which people were struggling to undo the lids as they ran. However, the volunteers were amazing. And there were plenty of people handing out sweets on the race course. Overall, it was a brilliant race and one I’d highly recommend to both newbie runners

With my disorganisation, I forgot to charge my Aftershokz. However luckily I had my iPhone headphones in my bag so was listening to my current Spotify fave – Big Booty Mix (honestly, give them a go, these mixes have powered me through many of my runs this week, alongside podcasts and audiobooks).

We often focus so much on our watches keeping us on pace to go faster, keep moving forward. But they can also be really helpful in holding us back. Having paces that are slower than our ‘goal pace’ or speedy pace are helpful targets to work towards on our easy days. In fact the more I read about elite runners and listen to podcasts with them, the more I understand the importance of slowing the F down on easy days.

I have in the past had a tendency to have a number in my mind that I want to run under, even when I’m taking a race easy. Half Marathons I always want to run a sub 2. For today’s 10 miler I wanted to run sub 1.30. However that wasn’t on plan for my pace targets. Why do I care so much what I run in an easy race, when I’m not trying to go for a time?

I realised today that it’s the long goal is the only real thing that matters. And that each run and race in the lead up to that big goal, should be for the benefit and not the detriment of the training towards that goal.

There’s this fixation on time with runners, especially on social media. And whilst I share all of my training runs and paces – they’re all available on Strava. I actually didn’t share the time from the Great South Run in my initial post. I had people ask me about it. And so there’s a pressure to post ‘good’ times. Or times that we have in our own head as a ‘respectable’ time for us. Which is all ridiculous. Each run has a purpose, each workout, easy run, tempo and race. We can’t and shouldn’t race them all. Let’s let go of these arbitrary time pressures, and just stick to what we’re supposed to do.

Honestly with 2 miles to go, I thought about saying to Sophie and Charlie that I would meet them at the end. And push on to get that sub 90 mins. But what would be the point? I wouldn’t have done the run on my plan, it would have been my ego getting in the way. And with 6 or 7 months to go until my big BQ goal (no race signed up for yet…this subject gets it’s own post!) one thing I can control is my attitude and my ego. 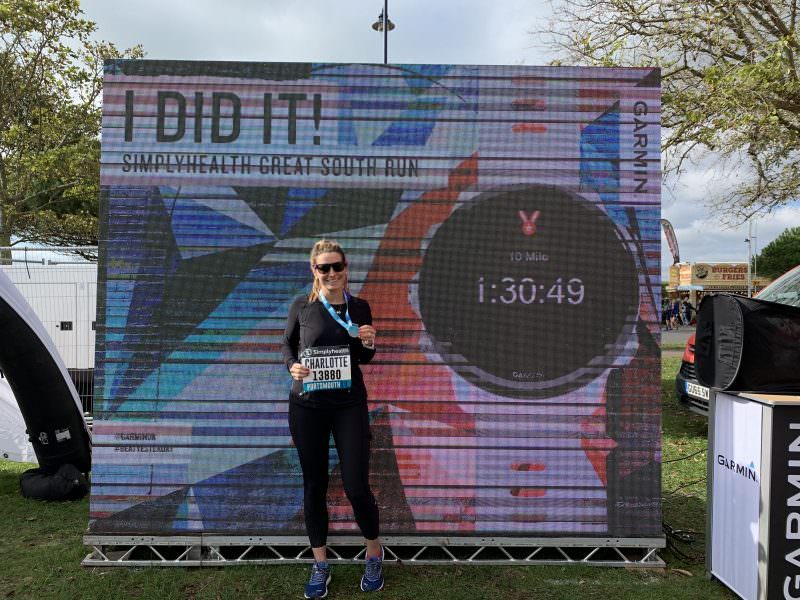 I was kindly gifted my place by Garmin, but you can enter next years race here.