Full disclosure: I was in Nepal with Impact Marathon Series as a staff member/volunteer, I paid for my own flights but had my accommodation/food, etc covered. 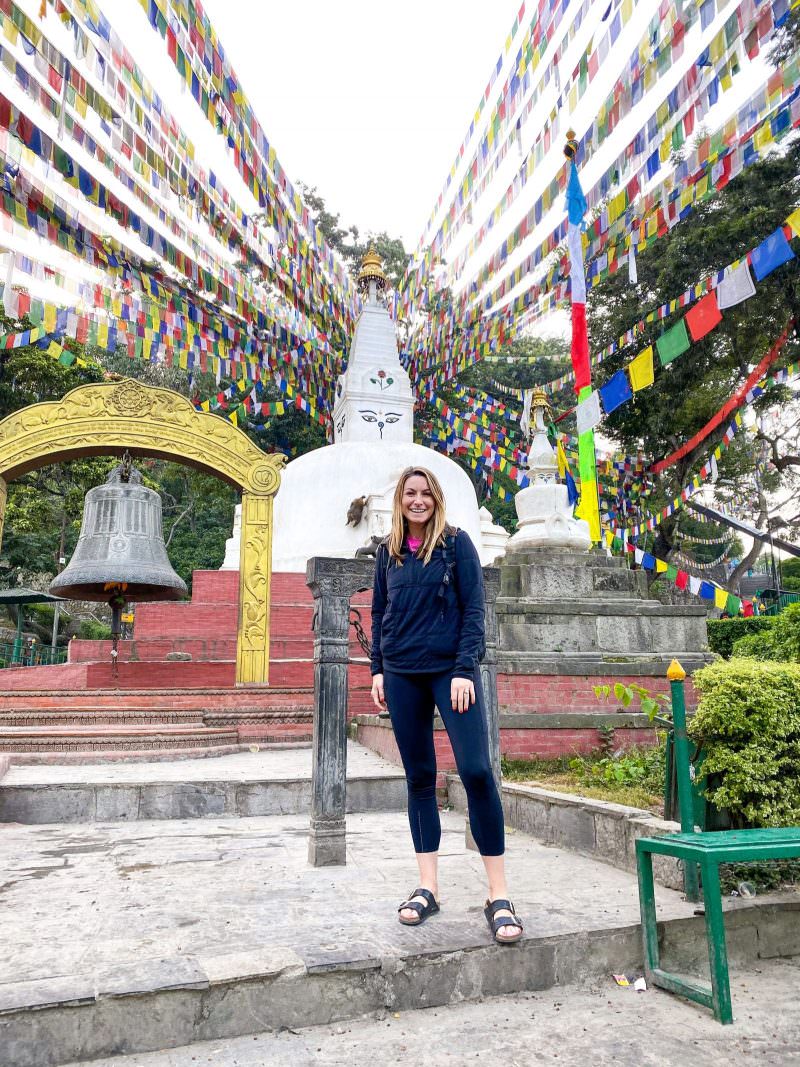 Kathmandu is a long way from London…especially if you don’t listen to advice and fly through India (spending a night on a chair at Delhi airport was not ideal), however upon arriving into Nepal’s capital city and meeting some of the Impact team and other runners, I knew it would be worth it.

It was Nepal Impact Marathon week!

Impact week didn’t technically start until Monday evening but a group of us were signed up for the Kathmandu day tour, a fascinating walking tour of the city. Unfortunately our guide was a little quiet and many of us struggled to stay fully engaged without a morning coffee break!

Kathmandu was not like I imagined, although hectic it felt like organised chaos. It was also far more metropolitan than I thought, with a strong cafe culture and food scene. It’s noisy, congested, polluted but beautiful, friendly and I felt safe at all times. We learned that Kathmandu used to be a big hippie spot however the government weren’t happy with the drug use in the city so switch to adventure travel and made marajuana illegal. I think they’ve been very successful in their venture! 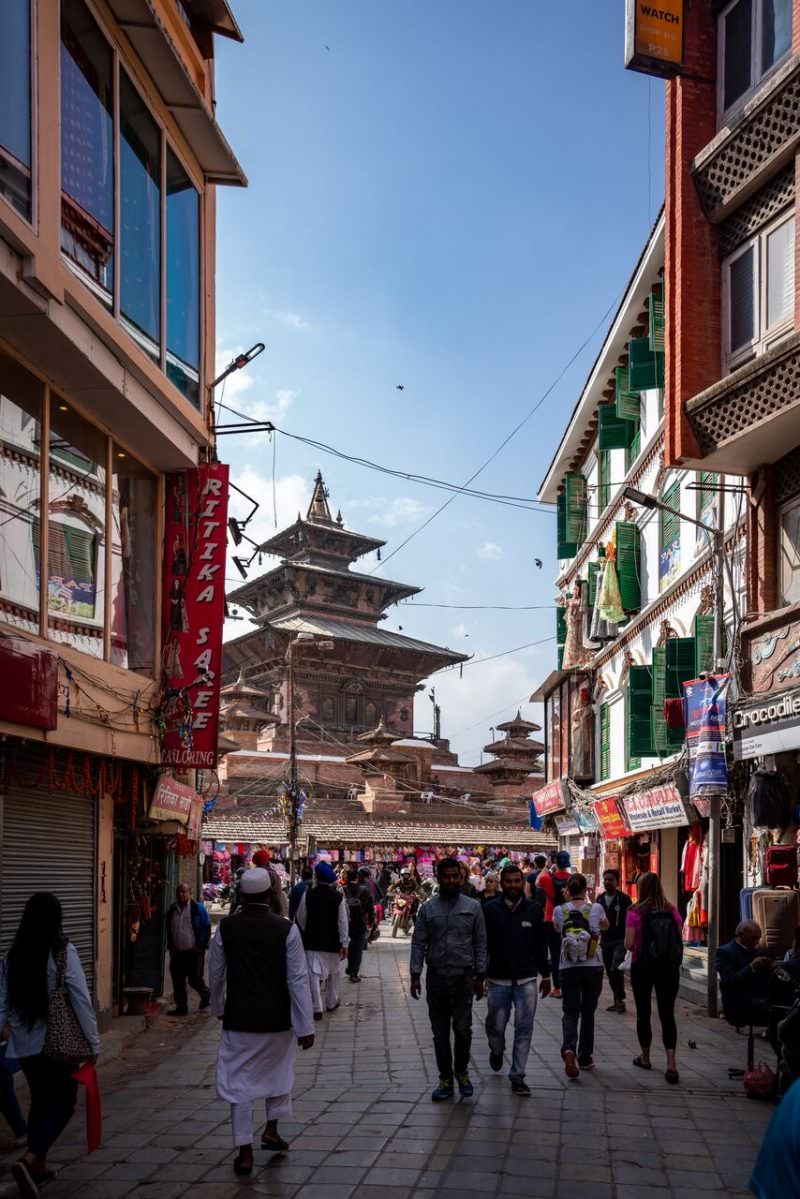 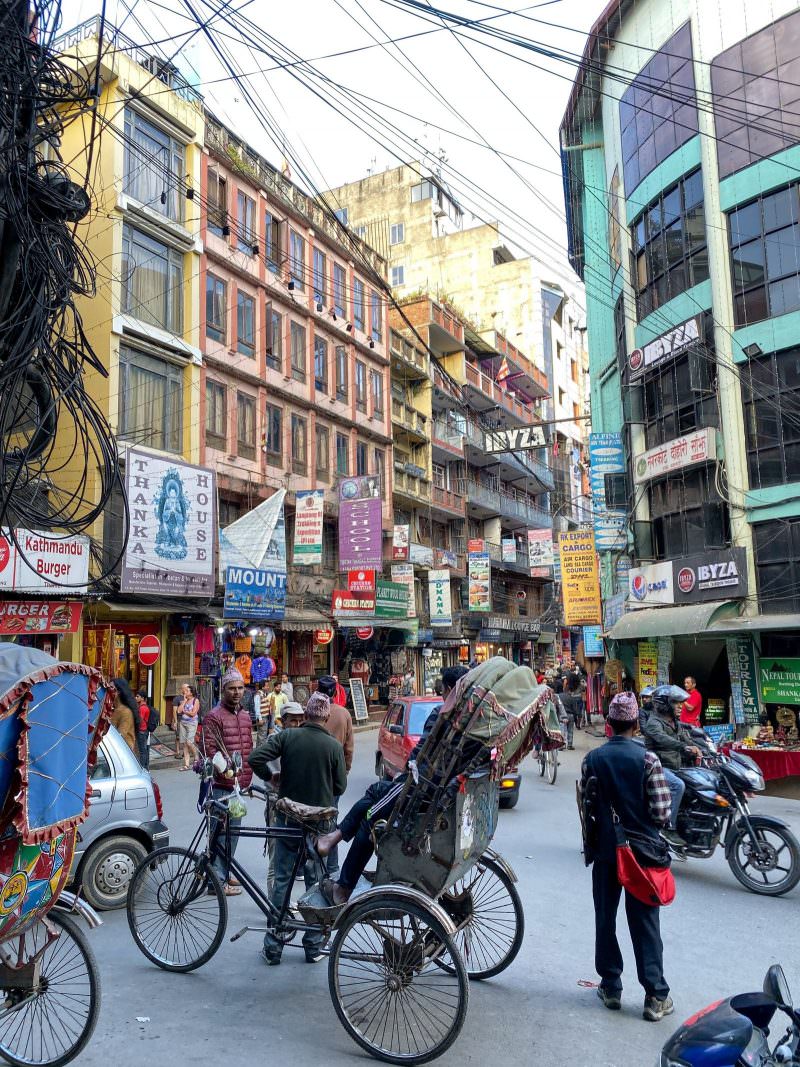 We split into two groups to visit some of the charities that Impact are working with this year; a refuge for women living with HIV and a Burns Victim Survivors charity that provide medical care for those suffering from life changing burns. Something that really hit home was how  disproportionately women are affecting in both instances. 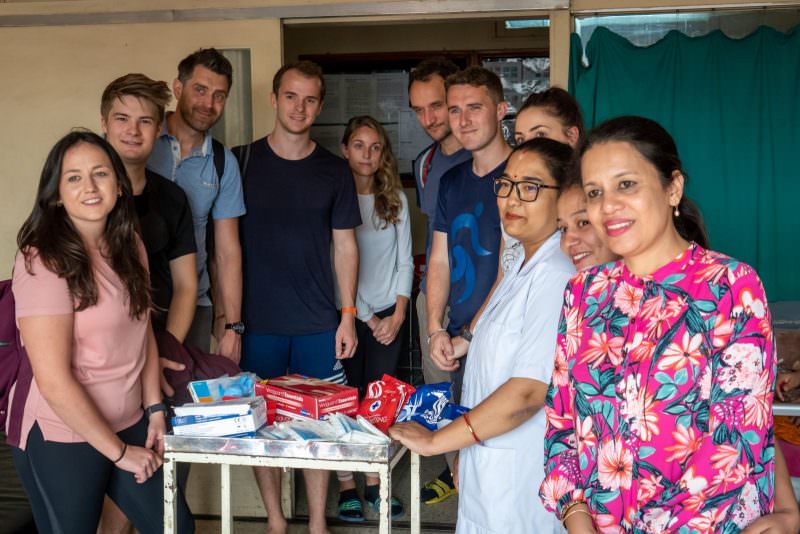 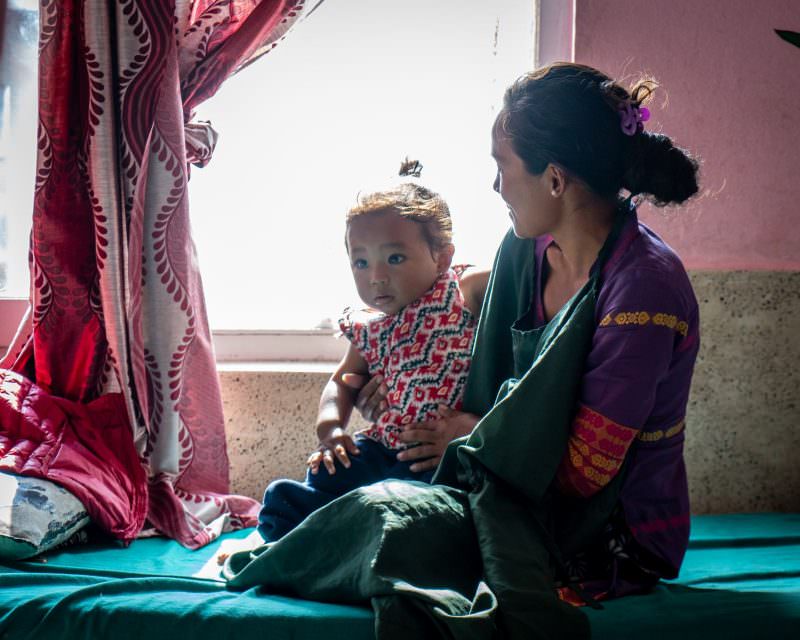 One group visited BVS (Burns Victim Survivors) and learned that the majority of the burns occur from kitchen accidents and acid attacks. The women often wait up to 10 days to visit the hospital post-burn. Waiting until they become infected before seeking treatment. They can’t afford the fee for the ambulance so they use public buses to get to the capital (which must be excruciatingly painful). BVS charity provides free care for those in need. Many of our runners brought out much needed medical supplies and fundraised to help them continue their work.

The other part of the group visited Shakti Milan Samaj where we learned how poorly women with HIV can be treated here – they are stigmatized, outcast and sometimes abused oftentimes by the husbands and families.

Whilst some women have contracted HIV as a result of being trafficked, the majority at the centre have contracted it from their husbands. The charity provide treatment, nutrition support and housing for the women and children. As well as financial and emotional support.

After spending the mornings with the charities, we met back up with the rest of the group for lunch and snack shopping before driving up to Kakani, a village in the Himalayan mountains and our home for the rest of the week. The drive was rather hairy at times. Including the moment when our driver stopped over a particularly muddy, narrow part of the road. And had to be coaxed round by his assistant (whilst he also asked one of the girls on the bus if she was single!)

Arriving at the campsite, I had a slight sense of humour failure when I discovered I was camping. (I am NOT a good camper.) However the tents had proper beds in, plenty of blankets and were pretty great. Plus my hot water bottle from home was a luxury addition! 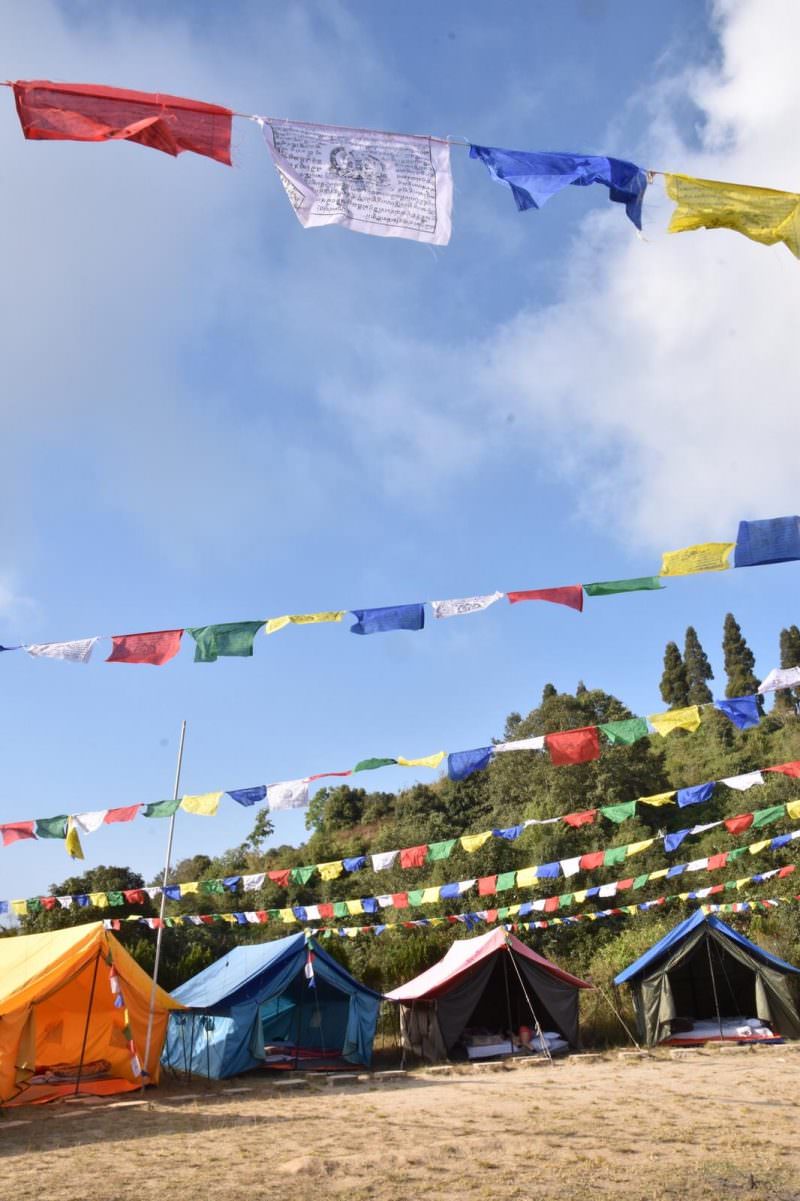 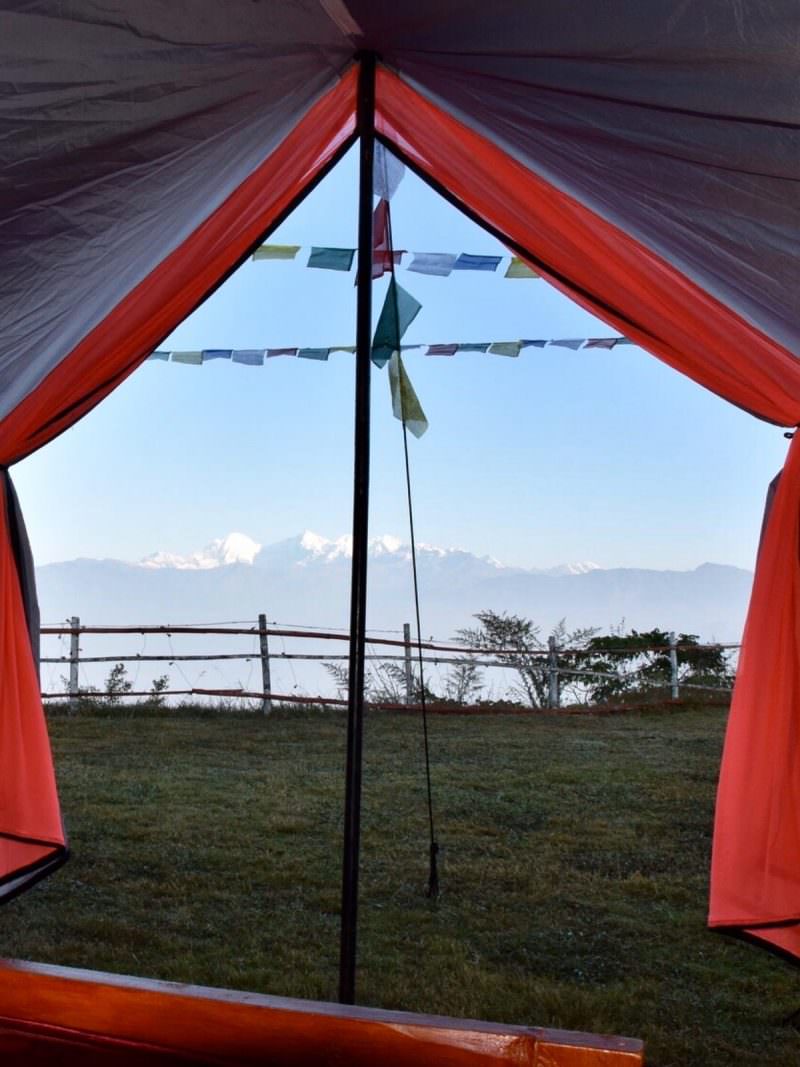 Up bright and early for an acclimatisation run, which was slightly terrifying. Despite living at the top of a 1.5 mile hill, I am not great on hills. And coupled with jetlag and 6500ft altitude, even less than 3 miles was a real challenge. 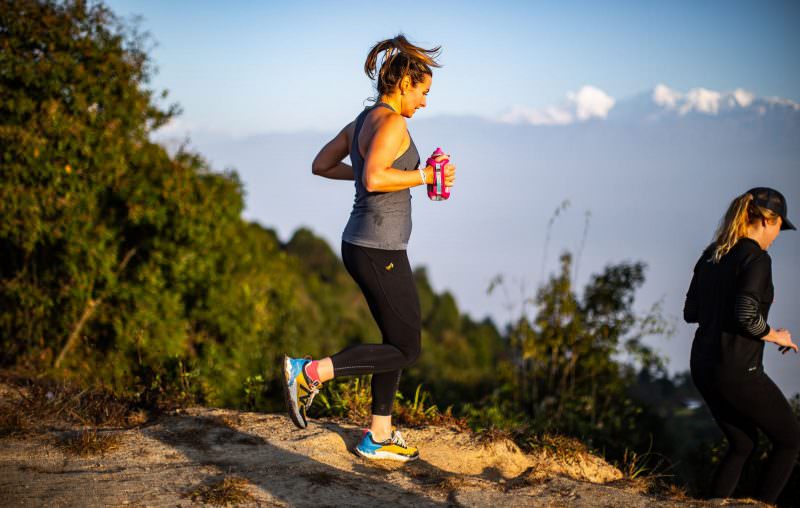 Our project whilst in Kakani was building an irrigation system and improving a road from Kathmandu to the village to help it withstand monsoon season and better the links between the capital and community. We were split into three groups with different jobs. Our group was firstly in charge of building a wall along the side of the road, that later turned out not to be a wall at all. But rocks used to flatten the road and reinforce the sides of the ditch alongside the road. One of just a few ‘lost in translation’ moments. 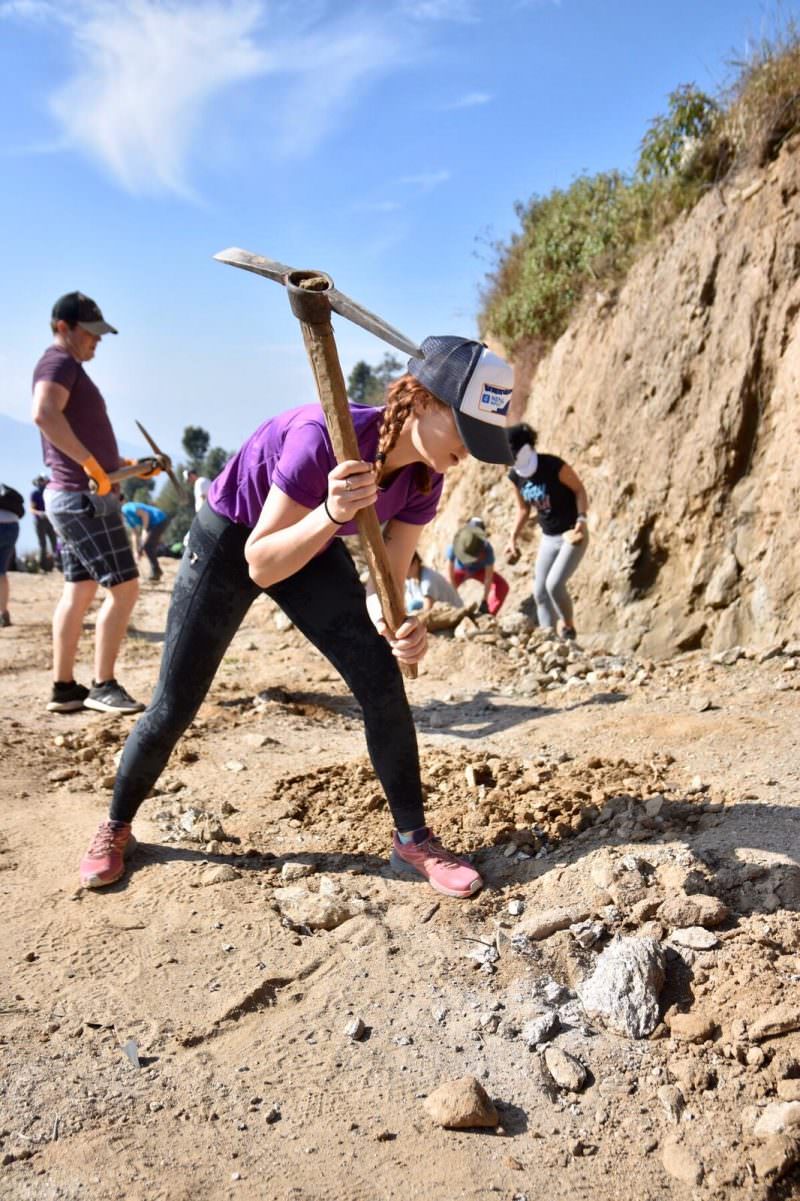 We lifted and moved a lot of rocks, cleared weeds and mud, built walls, danced. And got to know each other better. Nothing like a bit of manual labour for team building.

Lunch was delivered on the back of the truck; Dahl bhat with rice and vegetables (this was a reoccurring meal, delicious but pretty carb heavy!). 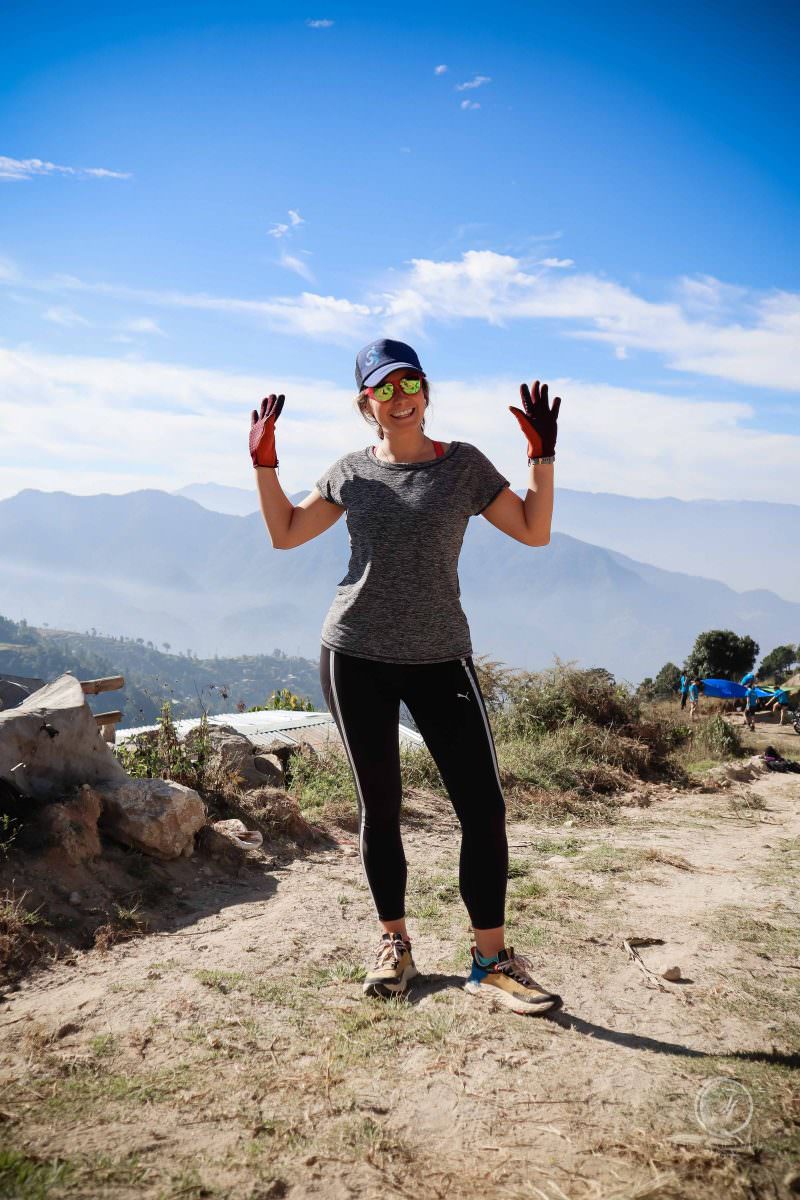 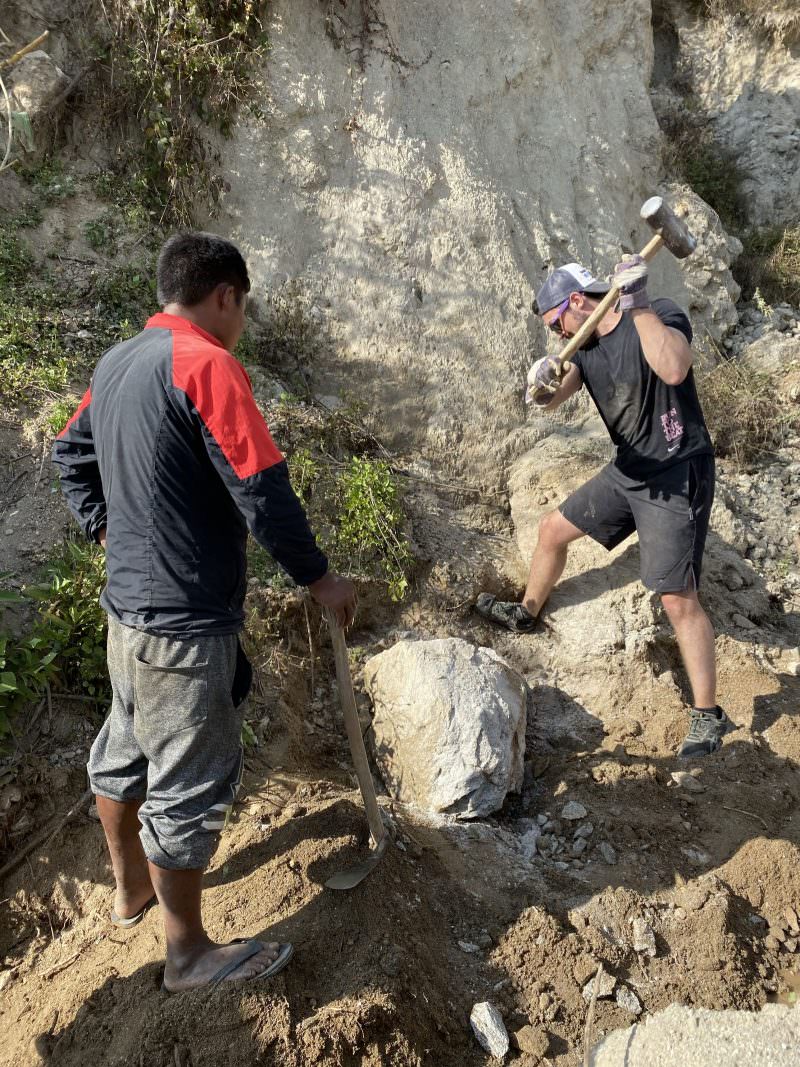 Evenings were spent making the most of the hot water (solar powered showers were amazing!), having beers by the fire, stretching in the secret yoga spot, and charging everything in the scout hut. Child Reach, one of the charities we were working with had set up a bar and coffee stand with all proceeds going straight to the charity. All the more reason to enjoy! 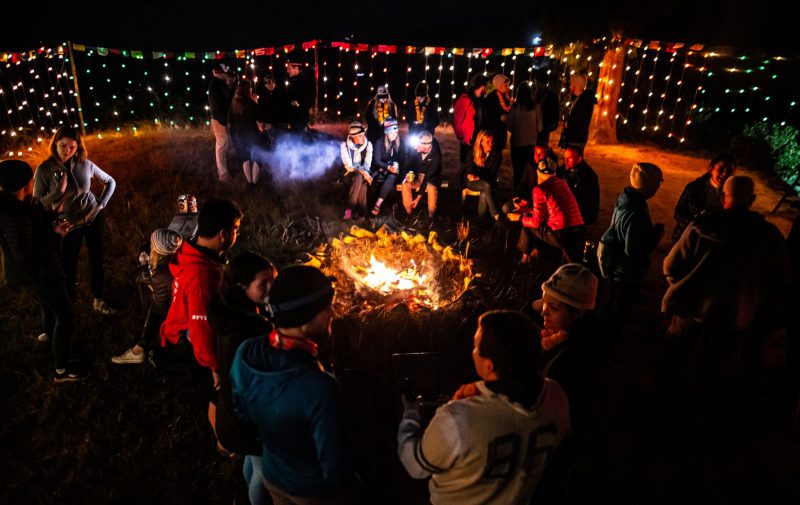 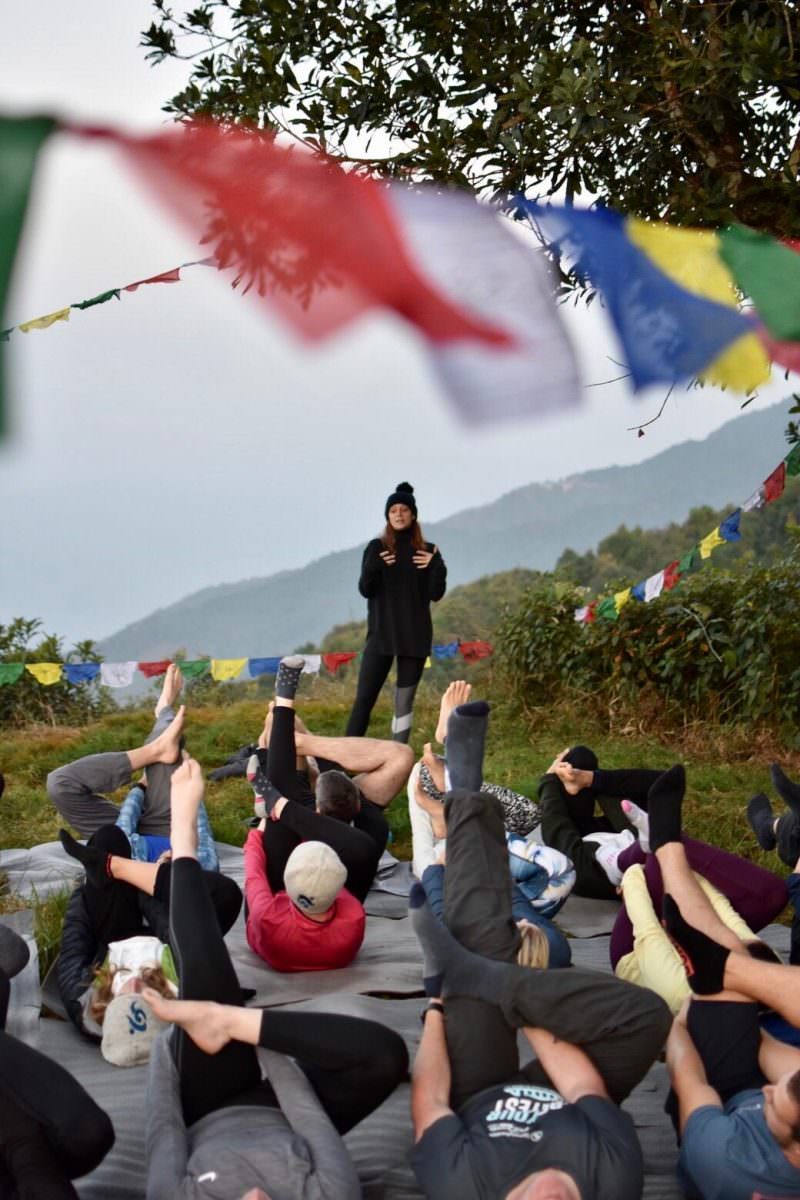 We got up for an early morning stretch session with the most incredible views of the mountains, including apparently Everest! So worth the 5.45am alarm to enjoy those vistas. (To be honest we had early starts everyday. I think 7am was our latest alarm!)

Another day spent working on the road, including a moment where I fell in a hole and twisted my ankle. (Not ideal when you’re supposed to run a half marathon in a few days.) Luckily it didn’t seem too bad and I was able to resume rock transportation as well as social media-ing! There were a couple of dance offs. Trying to teach the locals how to Macarena, floss and ‘Cha Cha slide’.

It was pretty hot during the days but really cold at night. Which meant we donned some rather questionable outfits in the hopes of keeping warm. Socks and Birks are a strong look. 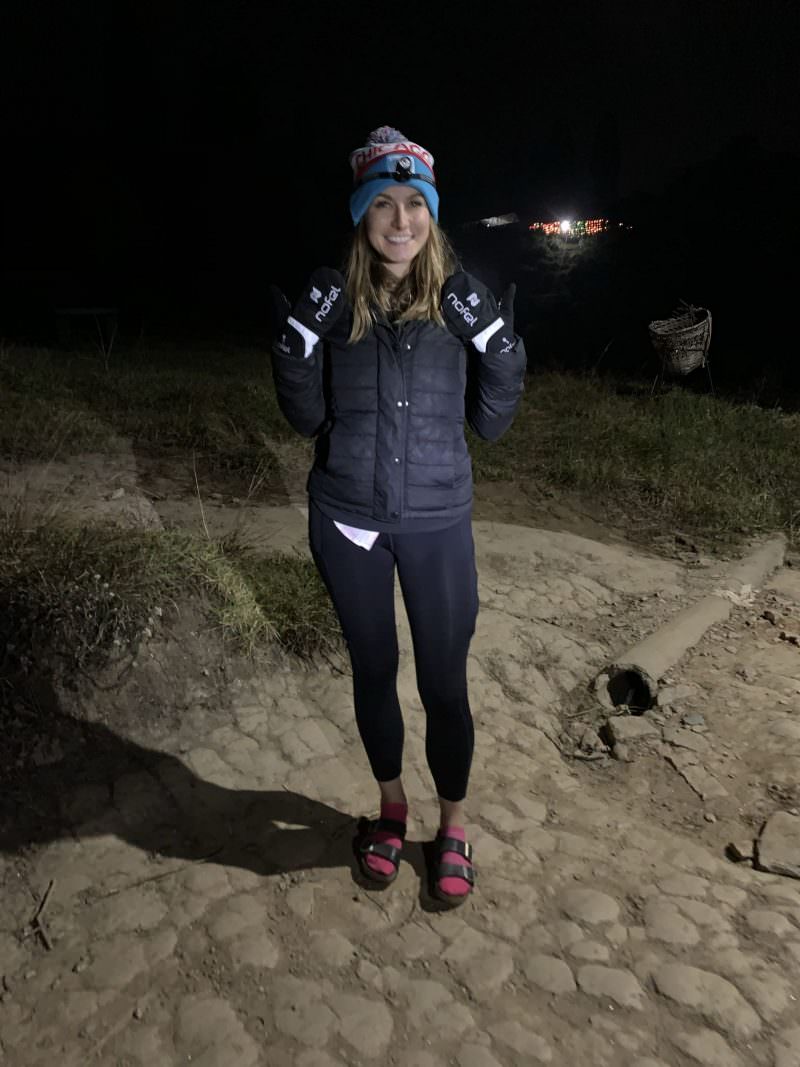 A day off manual labour before the race, although that doesn’t mean they went easy on us. We started with Momo (dumpling) making then headed over to the local school to learn more about how they’re teaching kids about trafficking. It was very eye opening. And terrifying to know that children are being sold for their organs or into slavery or prostitution. But it’s great to know that there are organisations going into schools to help teach kids about where they can go if they’re in trouble.

I helped with start/finish line set up during the afternoon. Folding 250 finisher scarfs and t-shirts. As well as ‘supervising’ the military police putting up the finish line banners. (Have you ever tried to explain wind in another language?!) 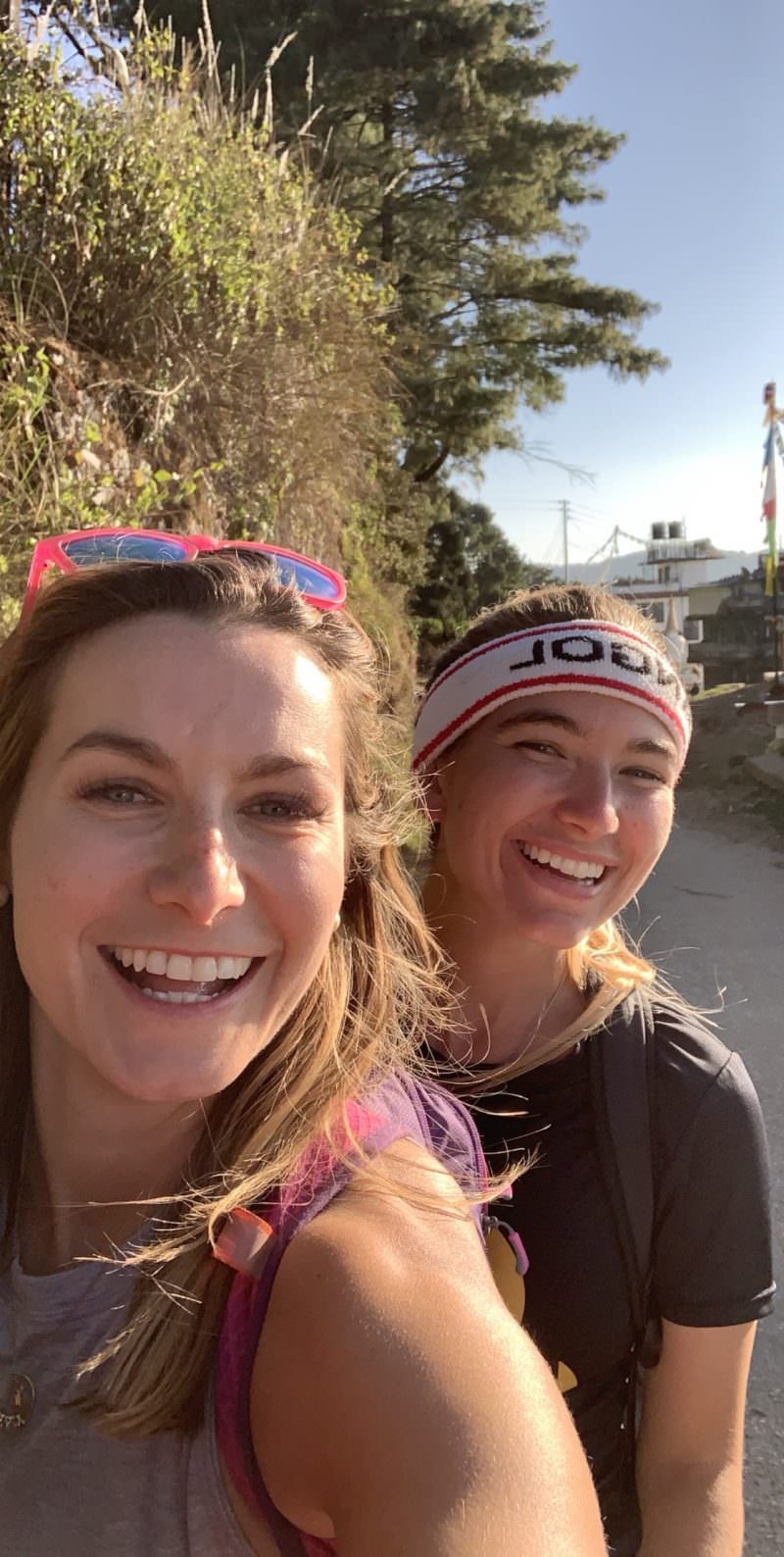 I think the thing that made this trip stand apart was the people. There were so many awesome runners from around the world with us. Every single person brought their own talents, humour and skills to the group. I felt so lucky to spend the week with them all. Not to mention the other staff that I had the pleasure of working alongside and getting to know them – roll on next year’s Impact races!

These three were the ones I spent most of my time with, shared many a beer, poop story, and fashion faux pas. We shared out our snacks, money (because none of us could get our head around the bills) and a lot of laughs. Thank you Cortney, Mark and Mike! xx 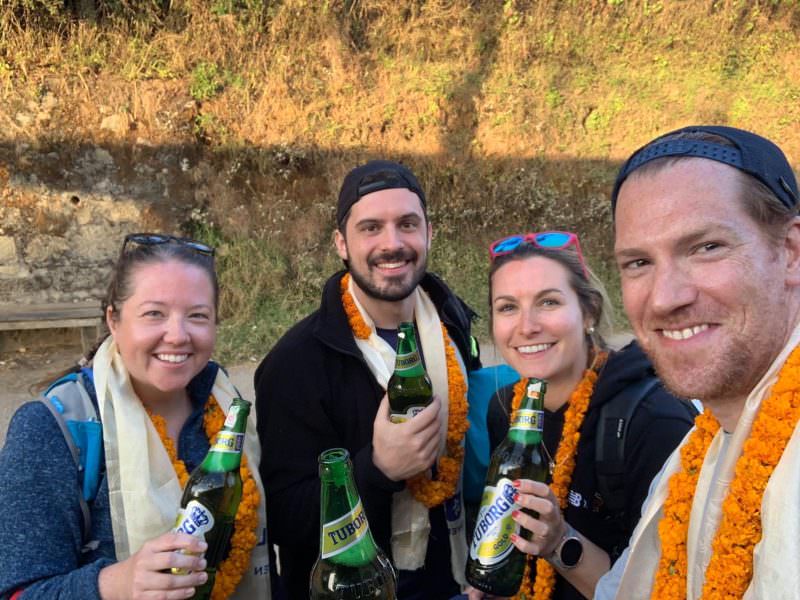 You can read about my experience in Malawi with Impact Marathon  and you can sign up for Nepal 2020 here.