You are here: Home / Running / Things you’re not supposed to talk about (but as a runner you do…) Running is great, most of the time. You can do it just about anywhere, for any length of time with very little equipment. You can run hard, fast, short, slow, hilly, or anything in between. You can run alone, with friends or with complete strangers. Overall, running is great.

There are things that non-runners don’t know about, and probably don’t want us to talk about with them. But speaking to other runners about it is like being in a (slightly weird) club. Below are some things that you’re not supposed to talk about…
Snot Rocketing
Pretending not to know what this is? Suuure.

All runners have done this, those that run outside anyway. It’s where you clear the snot out of your nostril, only not into a tissue. Onto the floor. Or yourself accidentally. It’s gross but necessary. No matter the season, I get so snotty when I run and it’s hard to breathe when you’re bunged up.

I can’t help but laughing when I saw this Olympic runner snot rocketing during London 2012. 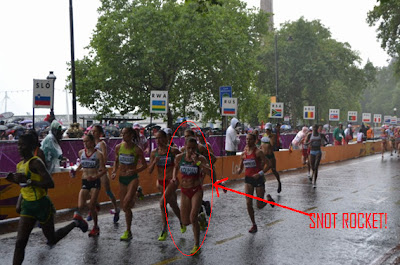 Runner’s Trots
Even more unpleasant than snot rocketing, but there is nothing worse than realising mid-run that you have to go. It is very common among middle and long distance runners. I know people (naming no-names) that have ‘gone’ by the side of the River Thames under a bridge, and another that has gone in a forest. Funny for others, not so funny at the time for them. I’m lucky enough not to have had to stop at a loo during any of my marathons, but know a lot of people do. I also know that I have a weak bladder and so often need ‘potty breaks’ on my training runs, and other races. I actually did have to wee behind a very thin tree just before the Chicago marathon.

Unfortunately not many running routes have bathroom breaks, although this is one plus to most race routes!

I have had some serious chafing wounds, so much so that I’ve bled, scabbed and scarred in some areas. Sports bras and running backpacks have caused the biggest irritation over the years, however I think I’ve found the right ones now. Others are chaffed under their arms, inbetween their legs or worse, on their nipples.

I’ve found that decent running attire, plasters and a lot of vaseline can help in most situations. I also suffered with some serious blisters when I didn’t wear the right socks for a 26.2mile walk!

What type of underwear, or lack of underwear, that a runner choices to run in is a very personal choice, and we’re usually quite adamant that our way is the right way.

Personally I’m a commando runner, but you can read all about the different options here. Other embarrassing ‘Running Problems’ I have expereienced;
Crusty salty face
Gu stains on my running outfits
Being thought of as crazy whilst running up and down my street until I hit a whole mile
Singing along to my music out loud without realising
Wearing flourescents ALL winter
Sprinting the final stetch of a run to improve the time
Running whilst staring at my Garmin to check I’ve got the right pace/distance