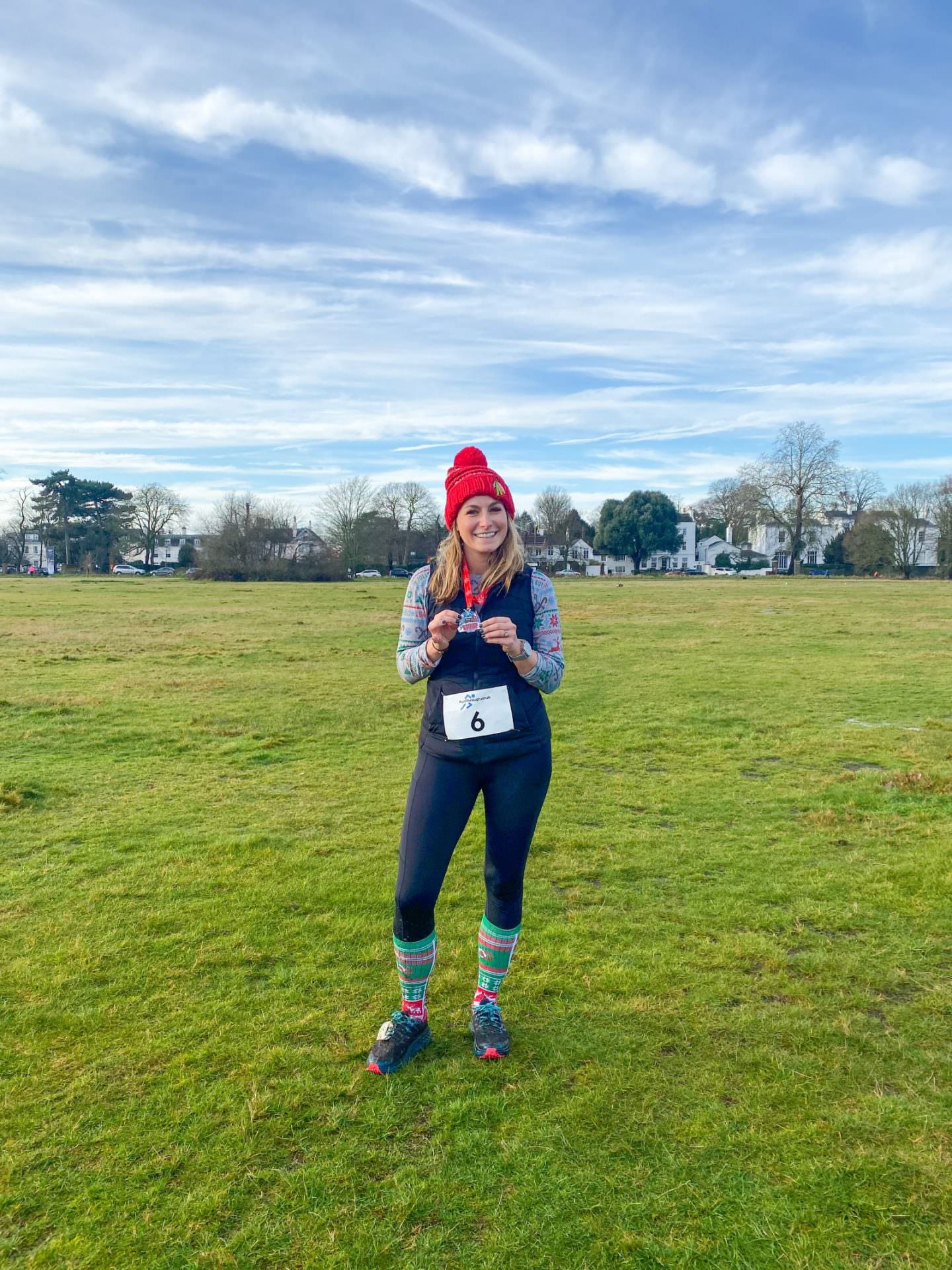 ‘You never regret a run’…

except the times that you do, kind of.

I really enjoyed the Christmas Fun Run on Sunday however it was probably not the best thing for my body when I’m dealing with the cough/cold thing that’s going round right now and I’m paying for it today (Monday). However, I have no complaints about the run itself.

I’ve seen so much about RunThrough events, with people raving about their friendly races, cute medals and delicious flapjacks, but somehow I hadn’t taken part in one yet.

Given that it was nearly Christmas Day and I hadn’t done a festive run yet, Ellie and I were keen to sign up last minute to the Wimbledon Christmas 10K. I mean I’m not driving an hour to run a 5K! (we were gifted our race places thanks to RunThrough). It has rained NON STOP in the UK for the last few weeks so it was no surprise that the ground was water logged, the paths slick with mud and the terrain definitely more trail than path. This was not a run to try to PB, and yet I was shocked by the reaction by some runners to the slippery route and bottlenecks caused by people trying to avoid the deepest of the mud. Not to mention the blatant disregard to the Marshalls telling them not to run on the roads. The volunteers are there for our safety, and I couldn’t believe how rude some people were. 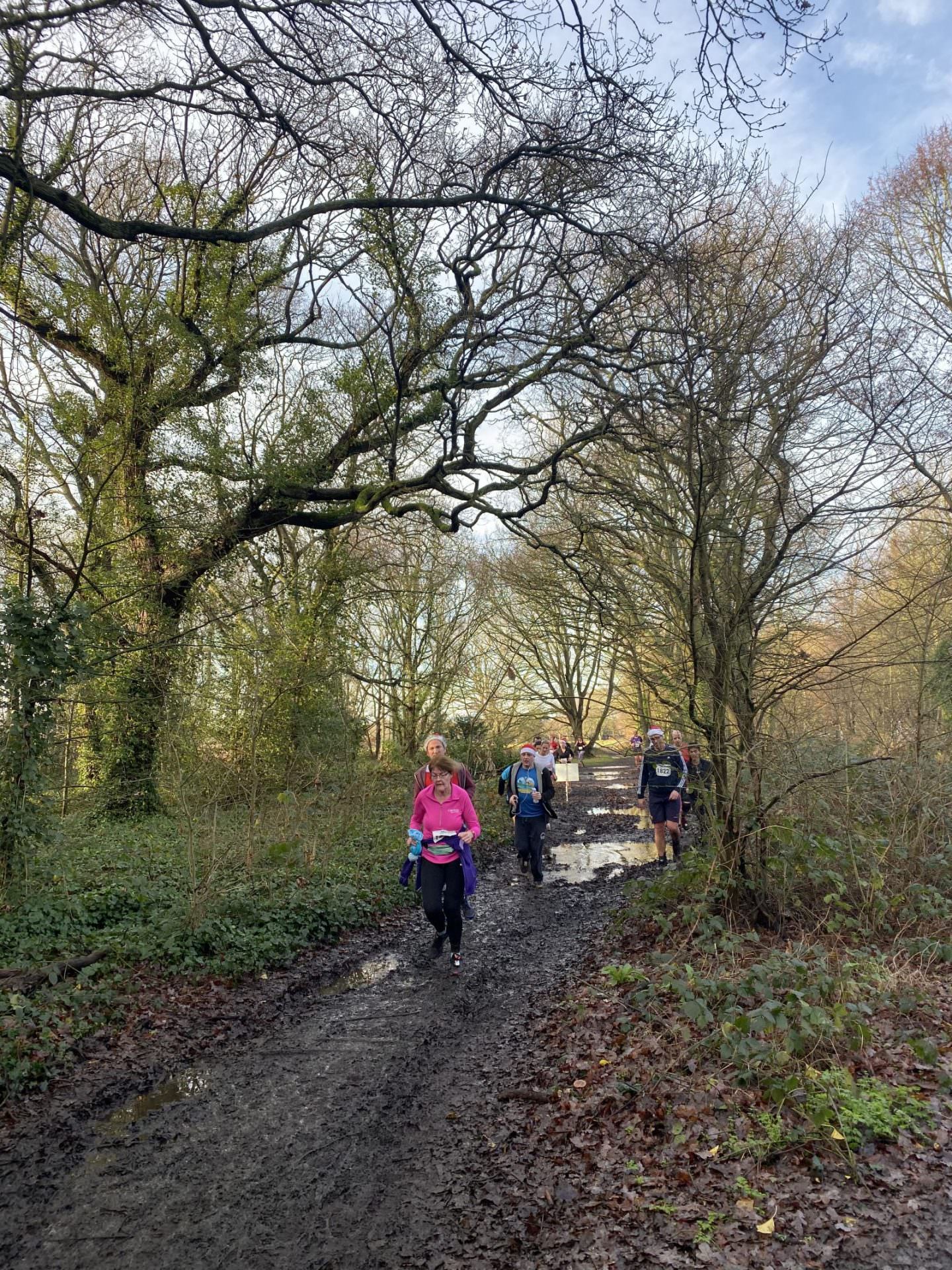 Have I mentioned that the two loop course was muddy?!

There came a point that Ellie and I just resigned ourselves to the fact that our feet were going to get wet and stopped squealing as we squelched through puddles. I managed not to cough too much. But I did struggle to breathe somewhat. And combined with the sticky stuff beneath our feet, the going was slow.

Ellie is training for an Ironman at the moment, and was also super helpful with my interview prep last week. So we caught up on life, training, Christmas etc as we ran.

I probably should have cut off after the first loop but I felt like I shouldn’t stop. I hadn’t run for three days because I’d been sick. And so wanted to stretch my legs, and honestly, I was stressing about losing fitness (which really is silly because by running 10K I’ve also probably set back my recovery). Why is it sometimes too hard to think clearly when it’s your own health/training but so easy when it comes to other people? (I’m still hoping I can do Christmas Day parkrun. But at this point I’m not sure if Tom will let me!) Post run I could not stop coughing. All the way to brunch with the Twice the Health girls, Jordan, Ellie and a bunch of other runners. Sometimes a race isn’t about the run, but about the community, the fun of running and catching up with friends. And a little bit about the medal, mince pie and flapjack! YES, free mince pies and flapjacks post-race. They are not messing around.

Overall I loved my first RunThrough experience and can’t wait to sign up to many more of their events in 2020! And because there isn’t a huge amount to share from last week, here’s a round up of the past 7 days of marathon training:

Wednesday – 7 easy miles with Ellie along the River. I stayed at my parents’ house on Tuesday night so took advantage of being in London to run. However I slept terribly and woke up feeling pretty crappy. I hadn’t developed a cough yet so thought I was fine to run. In hindsight, not my best idea. Hope you had a better week of running than I did! And if you’re running this Christmas, wishing you some very festive miles!